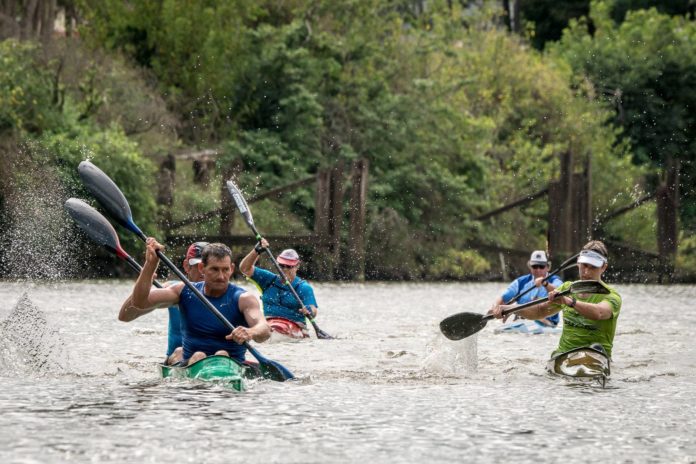 It was a fantastic day with 79 boats entering which is up on previous years. The organisation went extremely well with the new divisional racing format and Webscorer recording system working with no hitches. The volunteers from Far North Coast Canoe Club put in a great effort. The grounds and ramp were well prepared, the sausage sandwiches were delicious and event safety was covered well.

So many close finishes left on lookers cheering and appreciating the spectacle. In the L1 (15 kilometre event), Tony and Glen Curtis of Lismore in a K2 and Daniel Jenkin of Bonville Creek in a K1, raced neck a neck like days of old. The Curtis brothers just beat Daniel on the line. However because Daniel was in a K1, he was awarded the Clif Weaver memorial trophy and a bottle of wine for the fastest single paddler in the longest event.

In the L4 division, 5 paddlers, Armand le Roux, James Boyle, David Wilson, Brooke Cross and Vance Murphy all finished within 5 seconds of each other. Peter Hopewood won this division. Brook Crosse, as the fastest female on the course in the longest distance, also received a bottle of wine.

There were quite a few other close finishes where 2 paddlers paced each other the whole race and then sprinted to the finish line. These were Joshua Lee and Thomas King Koi; Gary lee and Phil Makings; Ava Lund and Cameron Mason; Rick Finch and Gavin Cook; Stuart Bryson and Flavio Rosano; and Stephen Boyle and Anna Harrison.

It was great to see so many SUP’s and quite a few juniors. Mick Skinner and his daughter Keala stole everyone’s heart in a ski 2. They both started the race paddling. Eventually Keala tired and finished the race being warmly cuddled by dad who was doing all the work.